The Orne estuary is one of the largest protected natural areas in Calvados. Between river and sea, discover a living picture, where a mosaic of interlocking decorations that promotes biodiversity is mixed.

A gem of green and water

It is on the western border of our territory, where the Orne and the Channel meet, that the Orne estuary is located, a large garden of around 1000 ha of protected area. The shore of the estuary is bordered on the left by Ouistreham and on the right by Sallenelles et Merville-Franceville-Plage. Between the two banks, nature dominates, cradled by the swinging of the tides and the comings and goings of pleasure boats. 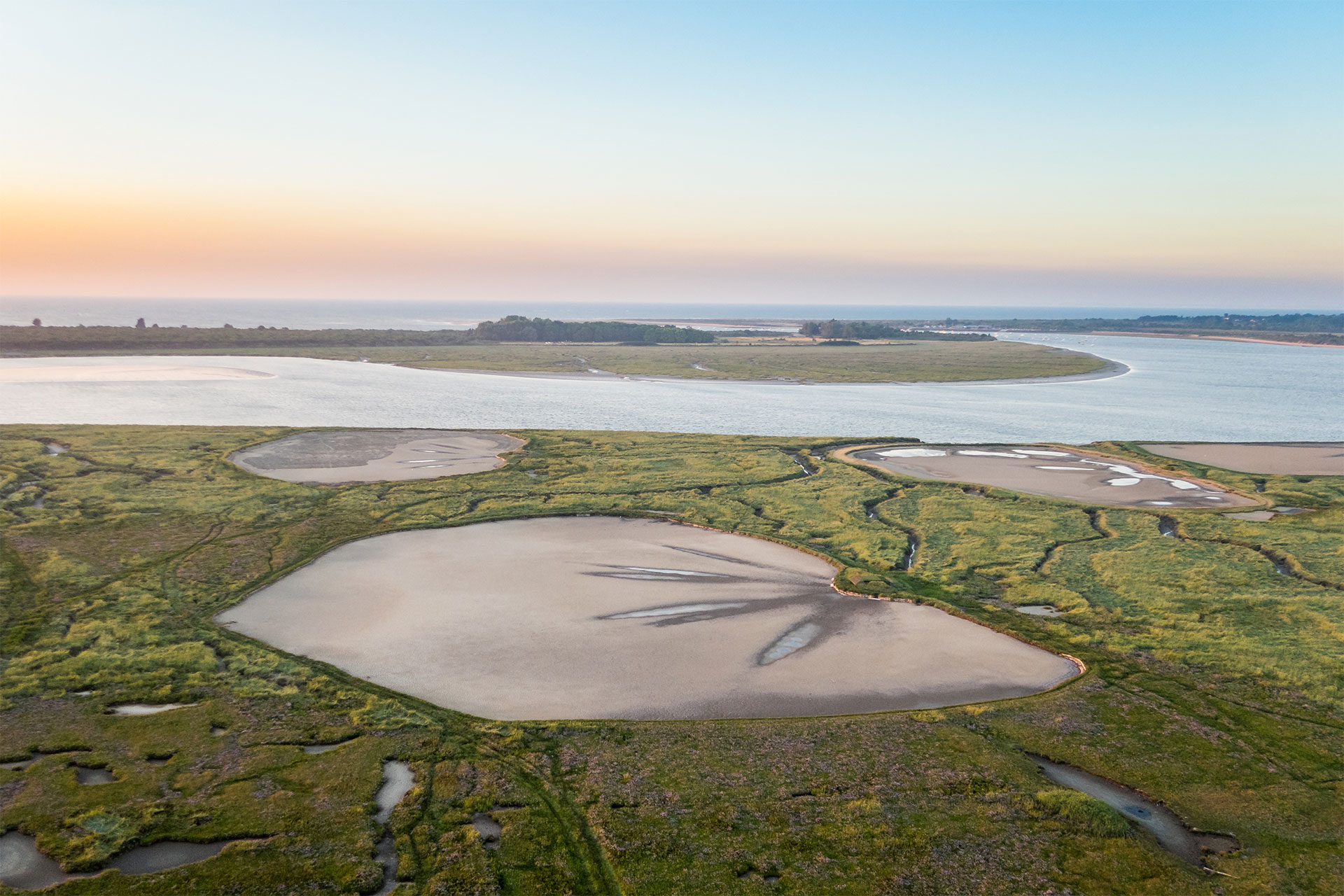 What is an estuary?

It is the mouth of a river into the sea. When the latter has a dominant influence, it is called an estuary. Conversely, when it comes to the river, we speak of a delta.

THEOrne estuary, it is a calm and peaceful place where nature lives to the rhythm of the tides. Sandy foreshore, dunes, grazed wet meadows, coastal mudflats, grasslands or salt meadows: different natural environments abound. But the estuary is also an endless battle between two worlds where the panorama changes, again and again, like the scenery in a two-act play.

No one would imagine that, under this magnificent painting drawn by Mer nature, an astonishing silent battle is being waged between seawater and freshwater.

Act 1: the assault of the high tide

Close your eyes and imagine, in the distance, the armed forces of the marine world preparing to invade the shores of freshwater lands. When the time comes, they go up, impassive, along the river, infiltrating the many furrows of polderized earth, reaching the surrounding vegetation and transforming the landscape.

Act 2: the revenge of fresh water

Despite this first onslaught, the battle between seawater and freshwater continues. At low tide, the armed forces of the marine world dwindle. In a renewed hope, the freshwater battalions mobilize and seize this moment to reconquer their lands.

In addition to the balance of power between seawater and freshwater that shapes the estuary, variations in sea level have also caused the coastline to evolve over the centuries. Moreover, to fight against siltation, save navigation to the port of Caen, liberate agricultural land or seaside areas: man has multiplied his interventions. This is the case with the creation of the canal from Caen to the sea, which particularly upset the profile of the bay, modifying the direction of the sea currents and carrying the sediments towards the east.

Walking enthusiasts, take the path laid out around the Gros Banc bird sanctuary, near the tip of Merville, to discover nature at your own pace: observatories and explanatory panels await you there. Continue your adventure with the Maison de la nature et de l’estuaire (nature and estuary interpretation centre) .

Do you prefer to be in contact with water? From nautical activities are also available to discover this protected natural area in a different way.

A stopover for migratory birds

Between the Baie des Veys and the mouth of the Seine, theOrne estuary is an essential stopover for many migratory birds (short or long-term rest area for wintering or summer visitors). Each year, winter sees teals, pintails, shovelers or whistlers, sandpipers and other penguins from the north settle in.

In spring, other species coming from Africa are back, some settle down. Special mention to nesting birds and especially the Kentish Plover which chose the sandbanks and the top of the beach to nest between April and July. Be careful not to step on them!

Among 400 species of birds which have already been observed, seals sometimes laze nonchalantly in the bay and bathe there in the off season.

Under the European "birds" directive, the estuary site is listed as " special protection area » attached to the network Nature 2000 : a system to reconcile the preservation of natural species and economic issues. 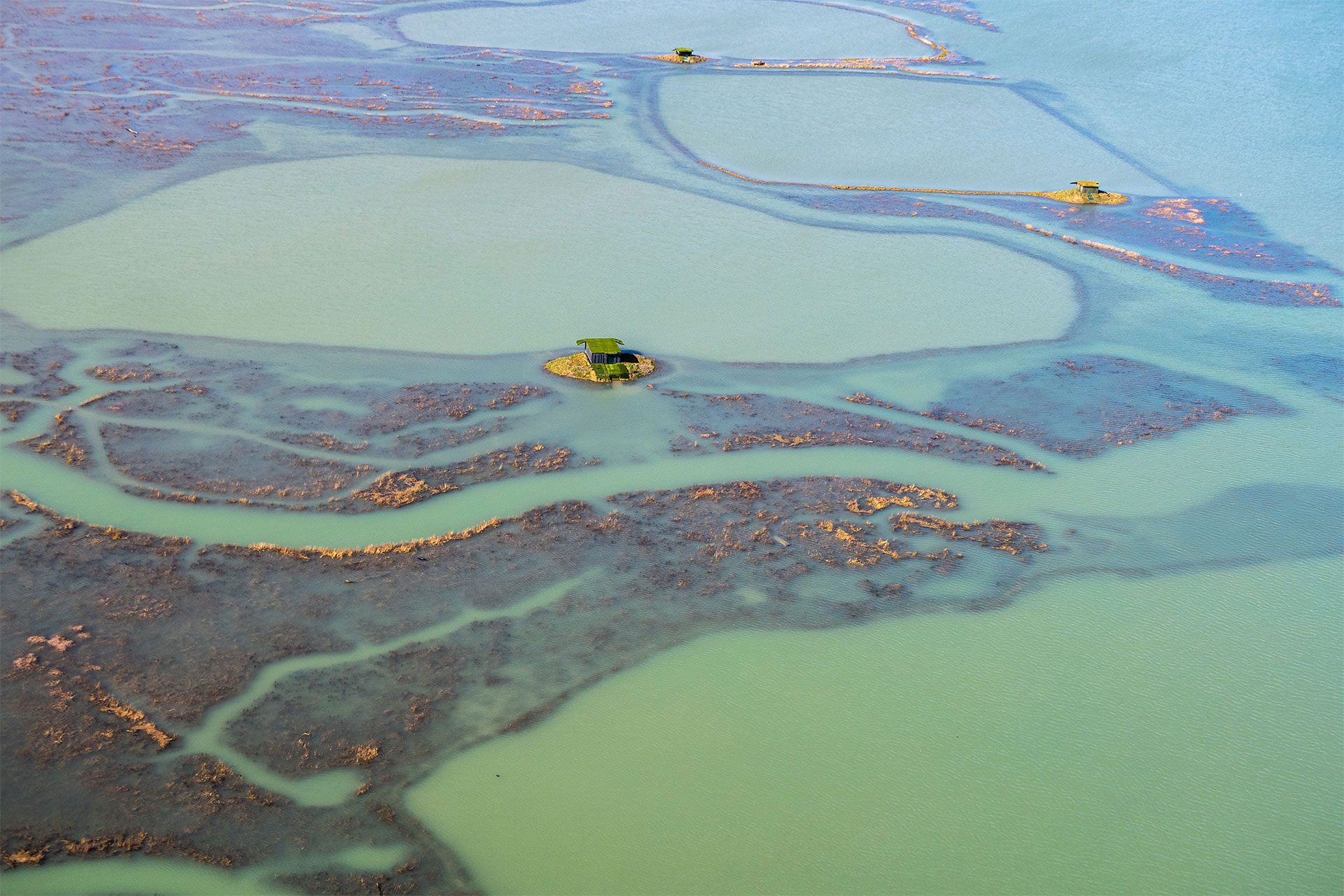 The biological richness of the estuary has generated a range of traditional activities, some of which continue within a regulated framework. Waterfowl hunting, managed by a departmental association, is practiced at night from August to January from floating huts called gabions.